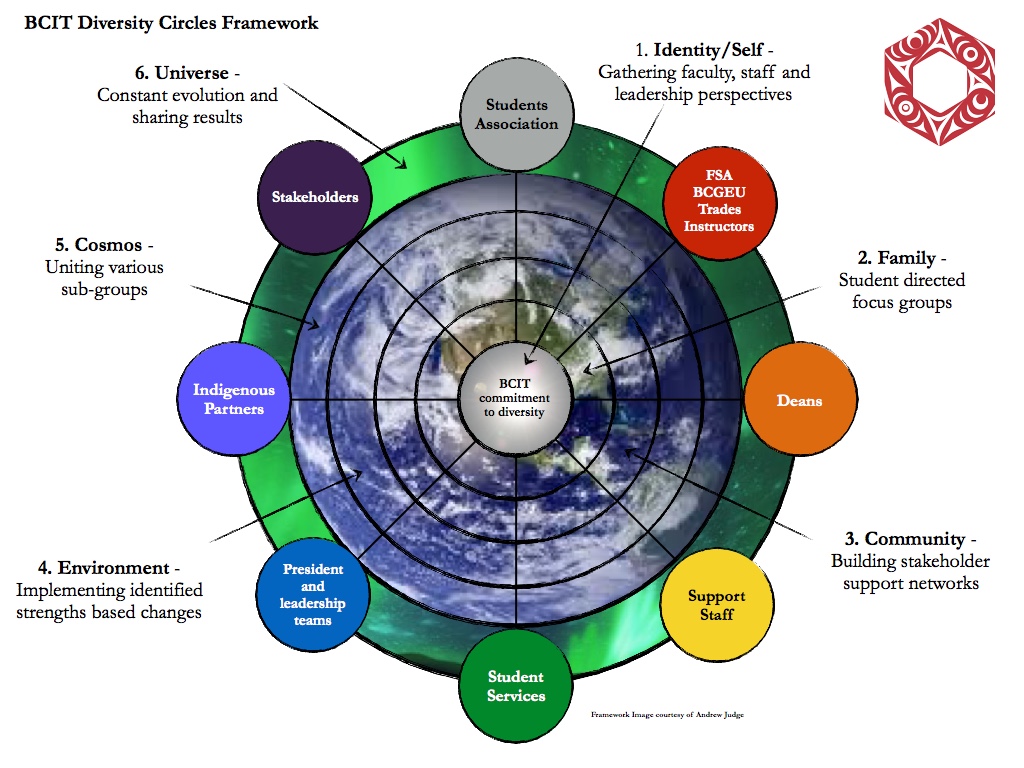 An Indigenous model for post-secondary teachers and academic staff to utilize professional mentoring and community outreach for engaging student and community diversity.

A series of panels, workshops, conversations, tools, and connections to support an effective model to engage with increasing diversity positively, sensitively, and strategically, by leveraging the power of community based expertise to drive responses to diversity and empower all participants in the diversity conversation.

At its core, an Indigenous model is best suited for this project as it inherently reflects the complexity, diversity, and interconnectedness of life. As such, it provides a necessary counterpoint to traditional institutional thinking, which is driven by the “normalization” of education and educational outcomes. In a chorus of recent scholarly work speaking specifically on the topic of neurodiversity in post-secondary education, but in terms which relate to any encounters of diversity with a rigid system, researchers such as Lester, Dostal, Gabriel (2013) emphasize the need to shift attention to how the normalizing drive of educational systems impairs the success of our diverse students:

In other words, a college student who identifies as disabled may only experience “disabling effects” when the environment is structured in such a way that it makes achievement and access impossible. If, on the other hand, environmental re-structuring occurred, the student may access and achieve what they sought to achieve. …Thus, rather than asking what “deficits” are within the individual that result in them not being able to access higher education, we can ask: how can the environment be changed in order to increase the students’ access to the learning environment?

Educators, administrators, and policy makers in the post-secondary education sector cannot help but notice that our student population is becoming increasingly diverse – in areas like intercultural diversity (different cultural, ethnic, and first-language groups, including Aboriginal), cognitive diversity or neurodiversity (Learning Differences such as Autism, Asperger’s, ADHD), and gender diversity (recognition of different gender identities and also recognition that some gender groups are underrepresented, such as women in Engineering and Computing, for example).

Our project hinges on the fundamental notion that educators welcome diversity and embrace the increase in diversity of our student population as a positive change, but at the same time our project speaks directly to the corresponding reality that supporting an increasingly diverse student body requires more resources, awareness, and new knowledge.

Furthermore, this knowledge and the discussion of what is needed to support diversity should not be confined within the educational institution. Critical to our wider society’s ability to respond to and leverage these demographic changes for the betterment of society is the mobilization of an effective model to engage with increasing diversity positively, sensitively, and strategically, by leveraging the power of community based expertise to drive responses to diversity and empower all participants in the diversity conversation.

An environmental scan of the sector indicates that some existing support systems for diversity are in place at post-secondary institutions, including our own, but these efforts can be characterized as stratified and disparate. In other words, they respond to various student populations as separate entities – disability resources to support students with cognitive differences, advocacy programs to respond to specific cultural groups, specialized programs to support underrepresented gender groups, etc. In contrast, our model views diversity as one very significant social change which involves many different facets. That is not to say that our view in any way homogenizes diversity – it does not – but rather that our approach is built on awareness and discussion of diversity as a whole; then, within that discussion, participants in the diversity conversation can drill down into and address specific manifestations of diversity.

This project has been co-created by FSA Directors Zaa Joseph and Shannon Kelly and is supported by the FSA. Diversity Circles is thrilled to be a recipient of  Community and College Social Innovation Fund (CCSIF) funding from the Social Sciences and Humanities Research Council (SSHRC).